The last of my festive posts about stories that have been turned into pantomimes. I remember going to see Peter Pan when I was a child. I think Anita Harris played Peter.

Peter Pan the character first appeared in The Little White Bird, a novel by JM Barrie published in 1902. Peter was a baby in this story, not the young boy of the later play.

From The Little White Bird
Illustrated by Jean Winslow 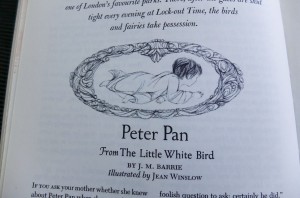 From The Little White Bird
Illustrated by Jean Winslow

The story we all think of as ‘Peter Pan’ was first a 1904 stage play called Peter Pan or The Boy Who Wouldn’t Grow Up. The story was then expanded into the 1911 novel Peter Pan and Wendy.

The following two illustrations are from my copy of The Story of Peter Pan retold by Daniel O’Connor from the Fairy Play by Sir JM Barrie published in 1917 by G Bell and Sons. The book was given to my nana in 1922 and she gave it to me when I was a baby. Sadly the book was slightly damaged in a water escape a few years ago. 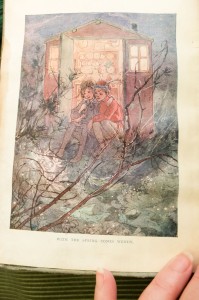 Illustrated by Alice B Woodward

The children meet the mermaids 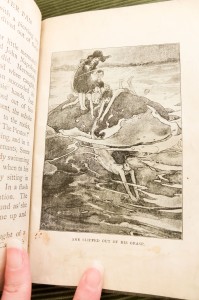 Illustrated by Alice B Woodward

In 1953 the Disney version of Peter Pan was released. This really cemented the ‘look’ of Peter with his green tunic and tights, feathered cap and pixie features. 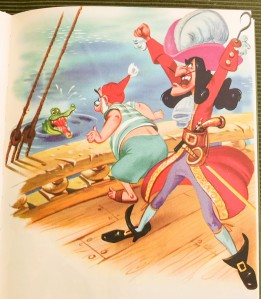 And finally here are a couple of the glorious illustrations by Anne Grahame Johnstone for her 1988 version of Peter Pan and Wendy. 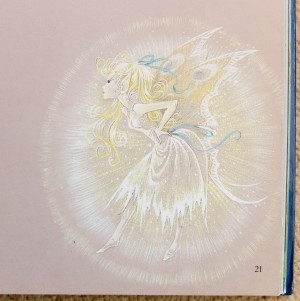 It’s behind you! Week Three: Cinderella

The third in my series of stories that inspire pantomimes. This week we have Cinderella.

Cinderella enslaved by her wicked stepmother… 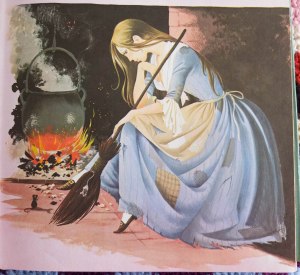 You shall go to the ball… 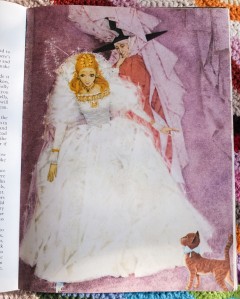 Mystery princess dances with the Prince all night…

When the clock strikes midnight…

If the shoe fits…

It’s behind you! Week One: Aladdin

As it’s Christmas and panto season I thought this month I’d do a weekly post covering vintage illustrations for classic pantomime stories.

So first up – Aladdin.

Here’s Mickey Mouse as Aladdin on the cover of the 1974 Disney annual.

This book has no illustrator credits. It was first published by Octopus Books Ltd, 1974. 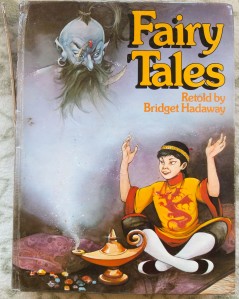 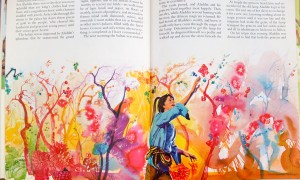 Inside illustration from Fairy Tales retold by Bridget Hadaway

And another from the Grahame Johnstone sisters.

Another book illustrated by the wonderful Janet and Anne Grahame Johnstone. This is a French fairy story by Madame la Comtesse d’Aulnoy written in 1682. Published by Dean 1972. This isn’t a story that appears in fairytale collections very often, let alone in a book to itself. It’s a classic enchanted-creature, dividing the kingdom tale, but in this story the enchanted creature is the princess and the prince is on the journey.

Three princes are sent on a quest to find the prettiest, tiniest dog for their father. The youngest prince gets lost in the forest and finds his way to a mysterious castle where the servants are strange disembodied hands. It turns out that the castle is the home of the Queen of Cats. 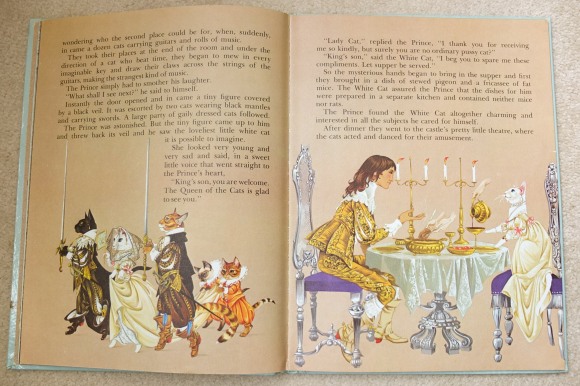 The prince meets the Queen of Cats

The Queen of Cats takes quite a fancy to the prince and he stays with her until it is time to return to his father. The Queen gives him a dog that fits inside a cob nut. Of course the King was a bit put out by this and sent his sons on another quest and so on and so on.

While the youngest prince is living with the Queen of Cats she treats him to entertainments, parties and feasts. She even has her own theatre – isn’t this great!

The illustration is sumptuous and the costumes are authentic late-1600s. Costume was one of the Johnstone sisters’ great strengths and interests – especially Anne (I believe Janet focussed on animals).

A little while ago I found a version of Peter Pan and Wendy illustrated by Anne Grahame Johnstone and first published in 1988 by Award Publications Ltd. I am sort of collecting Anne and Janet Grahame Johnstone books – picking them up whenever I see them. I particularly like their attention to period details (especially in the costumes). Many of their fairy story illustrations are beautiful – with their 17th and 18th Century style costumes.

But here’s Anne’s version of Peter Pan and Wendy (in equally lovely Edwardian and fantasy costume).

Peter Pan and Wendy, John and Michael fly to Neverland. 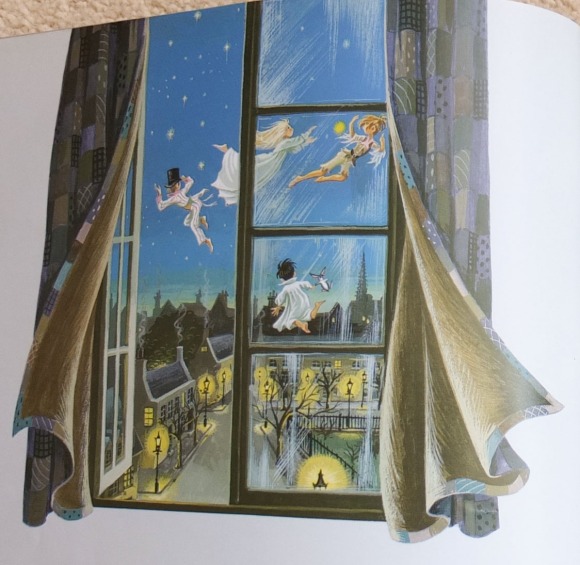 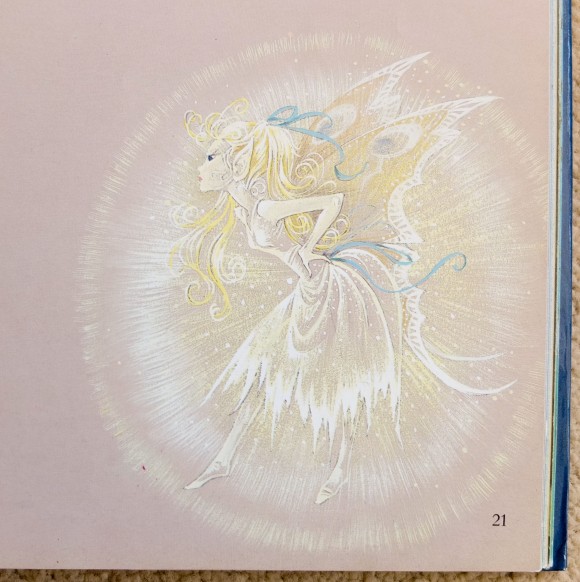 Wendy sews Peter’s shadow back on. 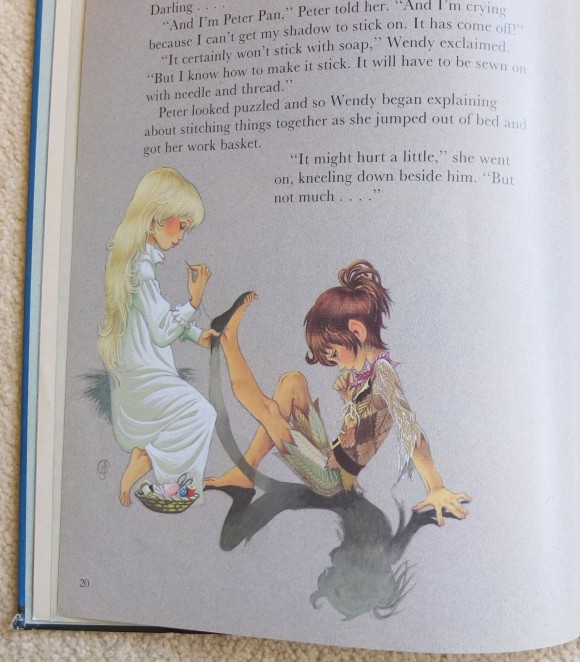 Sewing Peter’s shadow back on

I was given the Treasury of Poetry as a Christmas present in the early 1970s. I adored it – I read it over and over again. So much so that when I finally got around to replacing it a few weeks ago, I could remember pretty much every word and illustration. Here’s a small selection:

I love the lighting around the children on the left.

The Wraggle Taggle Gypsies is a traditional British folk song. There are several versions on Youtube including one by The Waterboys and a long entry about its history on Wikipedia.

Yesterday I came across The Treasury of Fairy Tales. I don’t remember having this book. It’s earlier, and you can see that her style is changing a bit and/or she’s using different media. 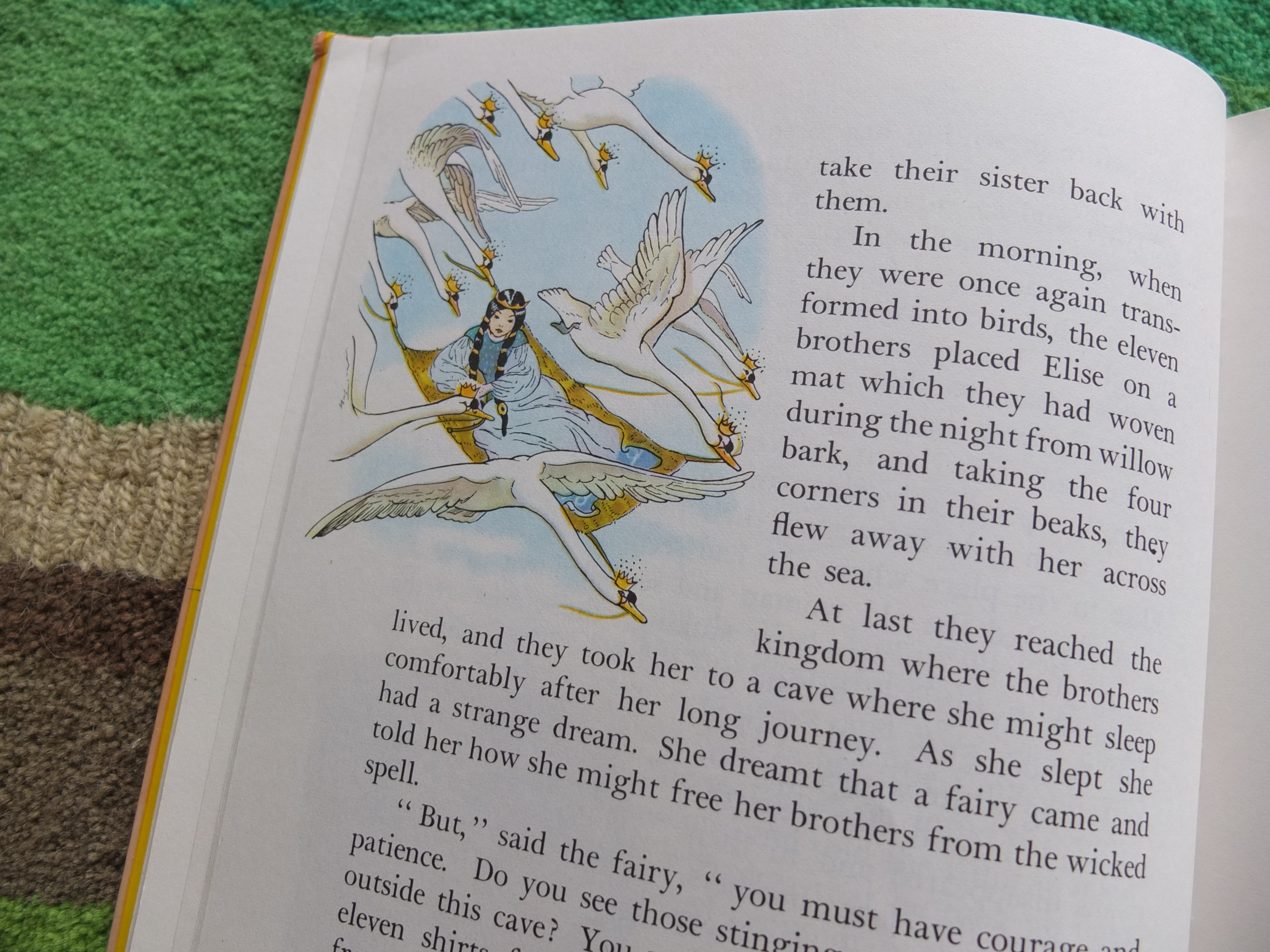 Illustration from The Wild Swans 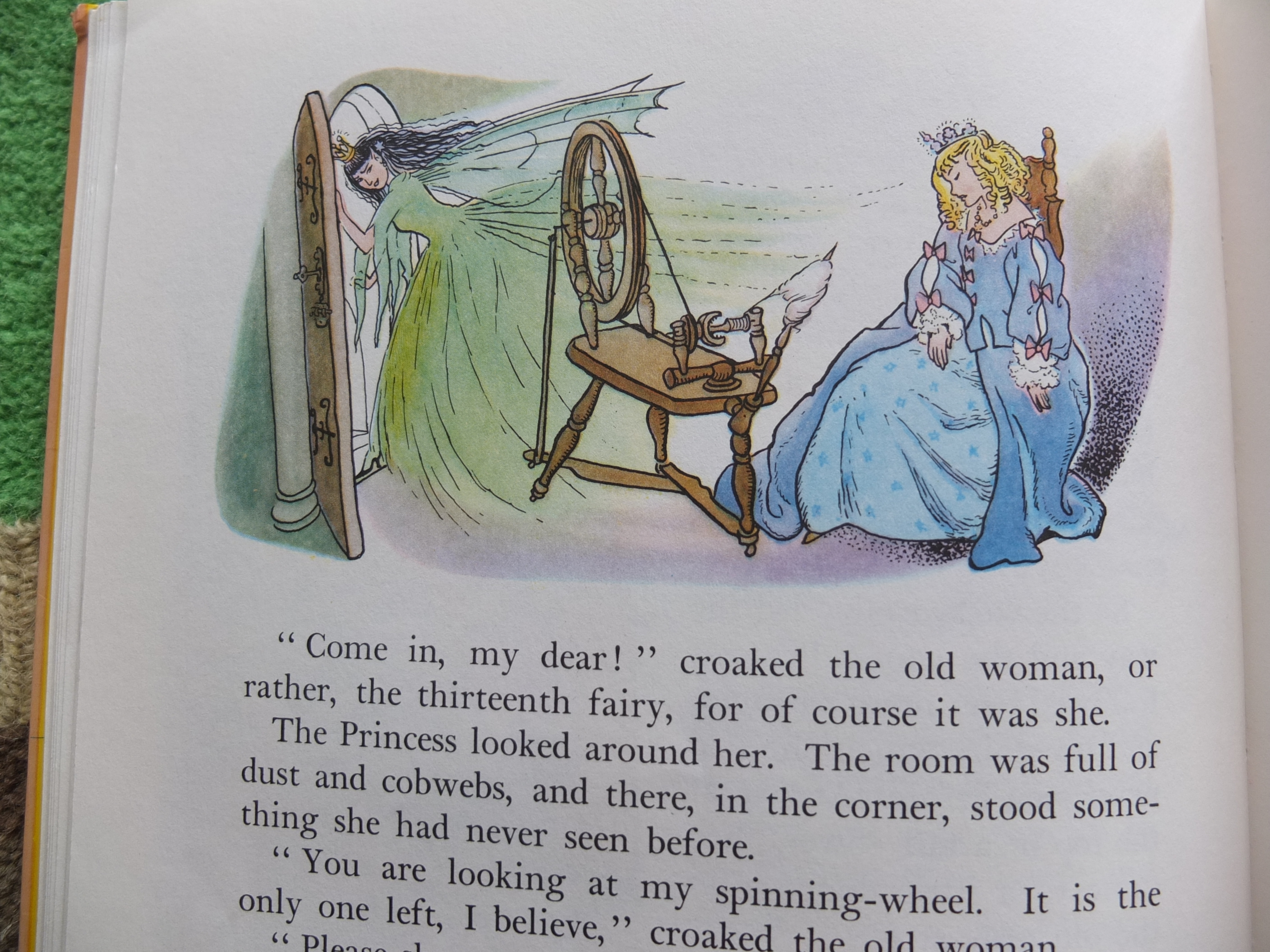 I can’t find much about Hilda Boswell other than a short Wikipedia entry: She was born in London in 1903 and died in 1976. She is also mentioned in the Wikipedia entry about Anne and Janet Grahame Johnstone. I’ve blogged about them before – and while their styles are different, they were working at more or less the same time and in the same genre. She is most known for illustrating Enid Blyton’s ‘Flower’ books in the 1940s and 1950s.

Addition: A request for the poem ‘Summer Morning’ by Rose Fyleman. Seems apt as it is a very hot summer morning!

In honour of Lewis Carroll’s upcoming birthday on the 27th January (which I share) here are some more 20th-century Alice illustrations.

First up: Anne and Janet Grahame Johnstone – published in 1973 by World Distributors.

And here is a thoroughly modern Alice: by Willy Pogány published by EP Dutton in 1929

This Alice has bobbed hair and short skirt.

Hare looks like he’s wearing a tank top under his jacket. 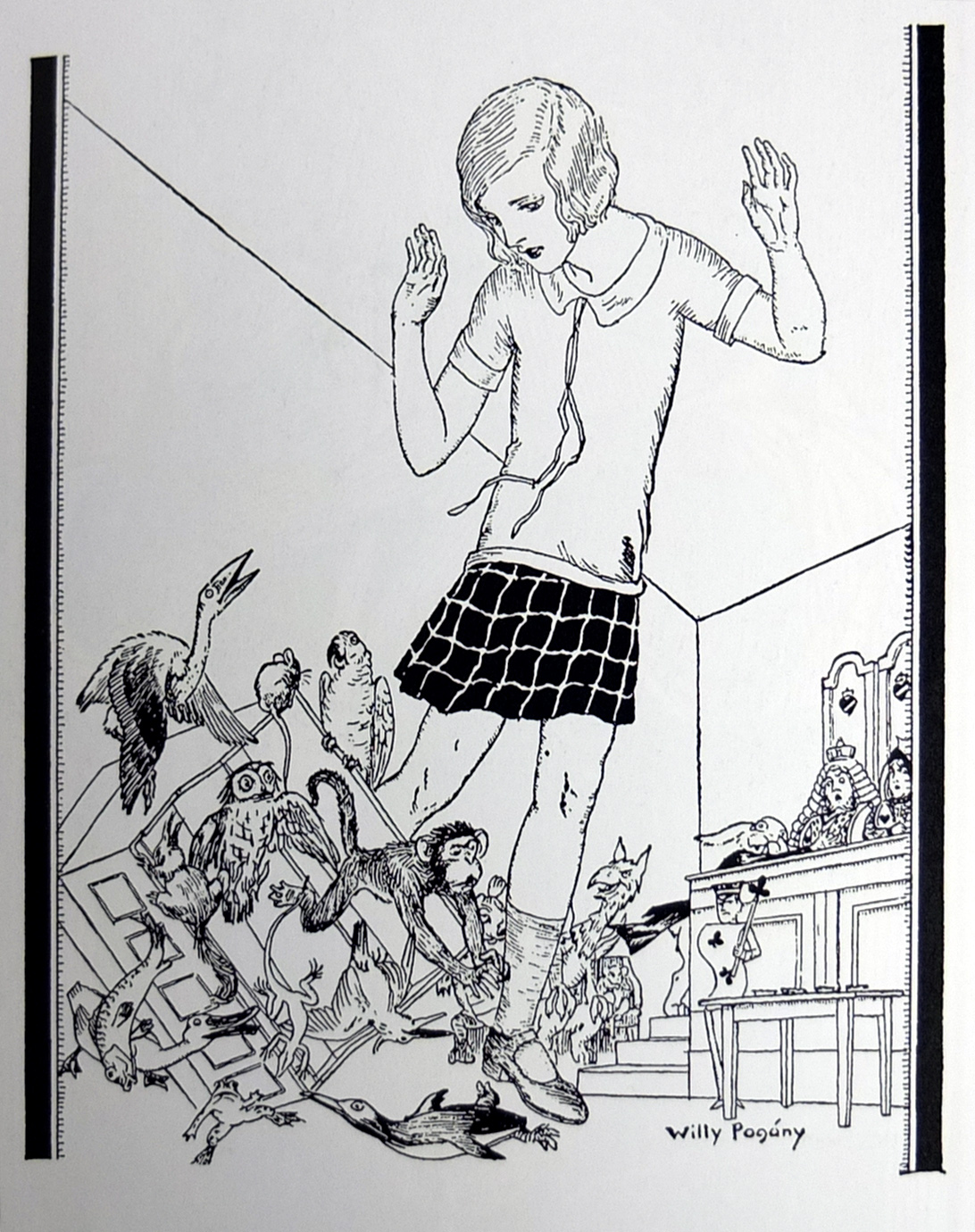 This version is less dreamlike than others. She looks like she really has just kicked over a jury of animals.

Finally another version from 1929 by Charles Folkard. This really looks like inspiration for the Dancing Flatware scene in Disney’s Beauty and the Beast to me. 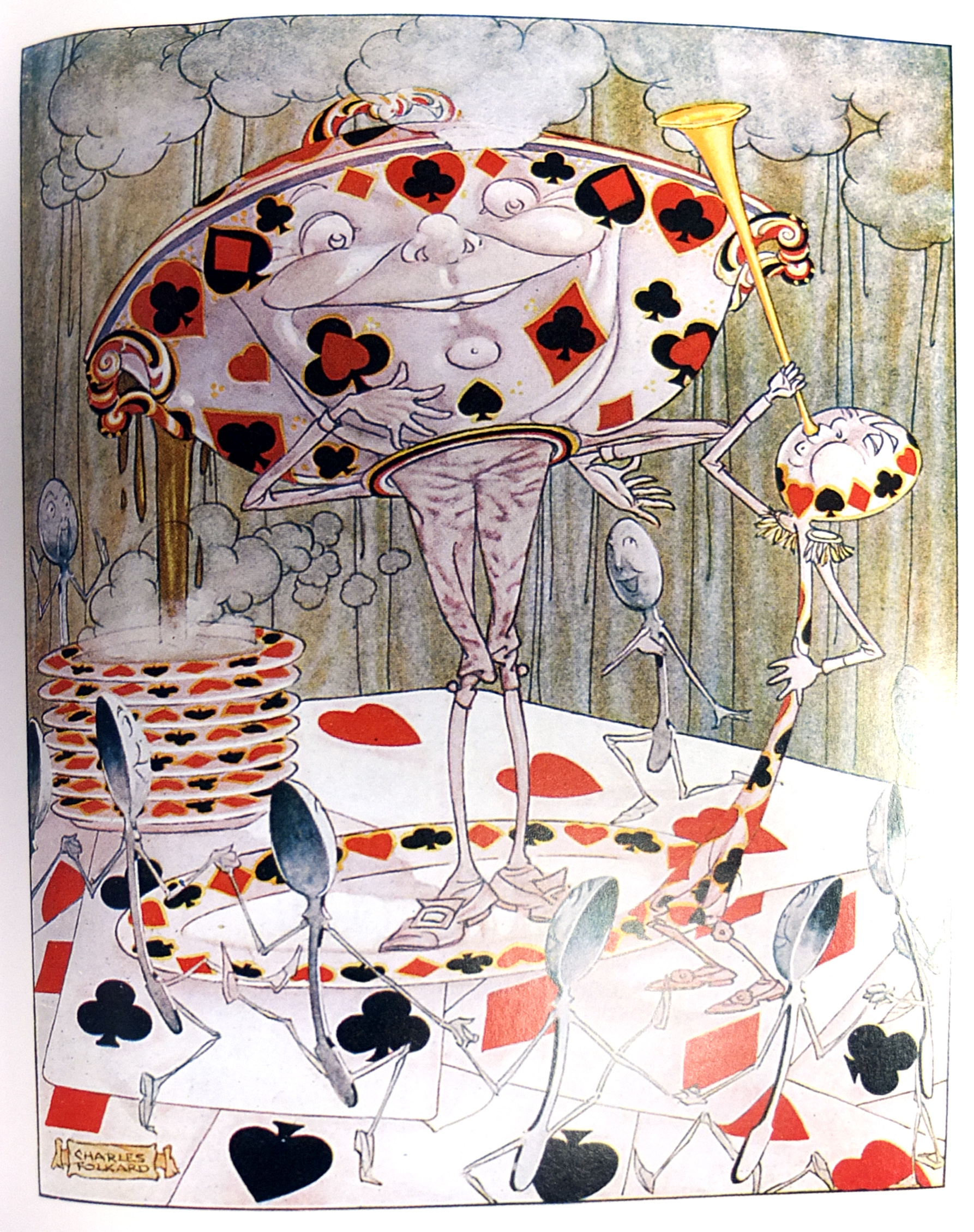 Books and their illustrators from my childhood number 2

Today’s book is Tales of Long Ago by Enid Blyton and illustrated by Anne and Janet Grahame Johnstone (on title page as Johnstone). This book, published in 1965, was a great favourite of mine. As well as being interested in costume I was really into myths and legends. This book is half stories from Ancient Greece and half stories from the Arabian Nights.

Title page from Tales of Long Ago